Hey ya’ll! It has been a crazy weekend. My feet are still tired and I have about two more days to go with my brother, which I’m excited about because I have some fun things planned when I’m not in class or at work (this week I am going to be at PS 64 in the Bronx examining how school breakfasts and lunches are run, what the kids eat, and how much of each item choice is taken). Saturday was a pretty relaxed day because my brother and his friend ended up spending most the day at museums and going to Brooklyn. I was glad because unlike them I’m not on spring break, so I still had work to do. Saturday is meant for date night though, so I looked through my bookmark list on yelp and decided where I wanted to go. I have been craving lobster rolls so much lately, so I asked my wonderful date (in case he reads this – probably not though since I didn’t give him the URL) if he would be down for seafood. Luckily I am a really lucky girl and he said of course, so we decided to go to the Lobster Joint. 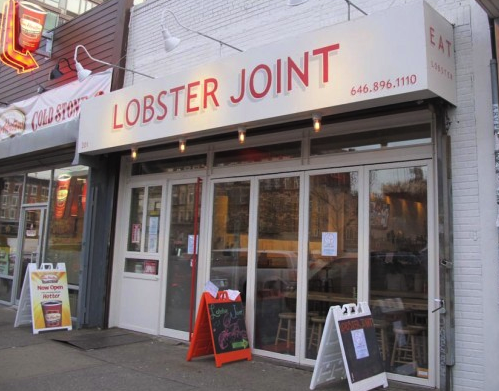 The lobster joint is a cute, really cozy kind of place to go eat at. It is located in the Lower East Side, which is turning into one of my favorite foodie neighborhoods. There are so many great food spots to hit up (this is where I am taking my brother and his friend on the Lindsay guided food tour – it is going to be epic). Anyways this restaurant was placed a few shops down from the iconical Katz Deli, so it is pretty easy to find. The inside is really adorable.

The entire menu is placed up on the walls, which I like because it is relatively easy to read. When you go into the restaurant, you order at the cash register and get a number. You can sit anywhere you would like to. The place was pretty packed at around 8 pm, so we ended up sitting at the bar, which I thought was nice because we could sit close to each other and actually talk privately. That is so hard to find in the city these days. The inside of the restaurant had a really cute nautical theme with lobsters and other sea themed items all over the place. The tables inside were high up picnic tables, which I thought made the Lobster Joint very kitschy. I was super excited for the food when we got there. 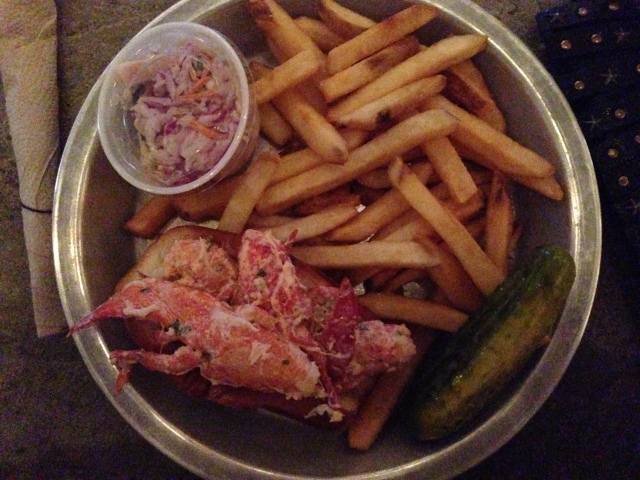 Look at that plate of greatness. I went into lobster heaven. We ended up both going for the New England style lobster roll, which was just your basic lobster roll with mayo and celery. They had a ton of other options available such as the BLT lobster roll, which had avocado, mayo, bacon (Ummm yes, please sign me up for that one next time). I actually thought the lobster rolls were really decently priced because this whole plate of food was 17$, and if you are a lobster roll fan you know that they can run you about 20-25$. This was a pretty good deal since you got a lobster roll, a pickle, a ton of french fries, and some coleslaw.

Look at that juicy, succulent lobster. It was definitely really good lobster. It wasn’t fishy at all, which is the worst when it is. It was mixed perfectly with the mayo and the celery. It is so horrible when there is too much mayo because who really just wants to eat a sandwich of pure mayo. No one. EVER. The bread was toasted to perfection. It wasn’t burnt, but it wasn’t soft. Overall this was definitely a pretty good lobster roll for my first official city roll. I will definitely be going on lobster roll adventures to test out all the other common places that there are to eat.

Fries on fries on fries. I love french fries. It is one of my favorite fat kid treats to myself. Of course it was my cheat day/weekend, so I allowed myself to choose the fries over a salad for the side. They were actually really good french fries. The best part was that I got to eat the rest of my date’s lobster roll because he was so full from eating a little before dinner. Win for me. I was a happy girl. After dinner we ended up going to a knish shop for my date to try some Jewish food, which was cute. He ended up getting a blueberry cheese one that was so to die for that today I had to go get some for myself. Overall it was a great night with good food and great company.

I'm a 24 year old masters student living in New York City. I'm currently studying nutrition and exercise physiology at Columbia. I have a passion for healthy living, fashion, cooking, and so much more. Come join me at my blog for a fabulous adventure!